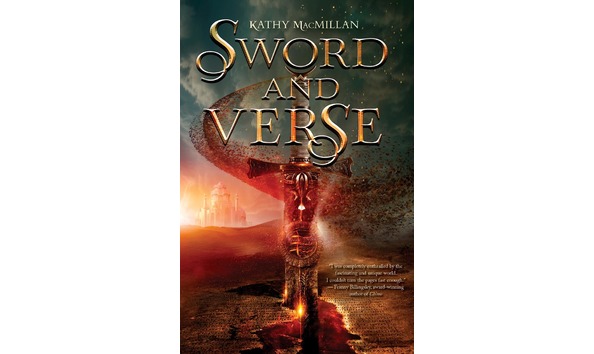 Annotated Copy of SWORD AND VERSE by Kathy MacMillan

A truly one-of-a-kind item!  Receive an autographed copy of SWORD AND VERSE by Kathy MacMillan, annotated with maps, extras, and secret information by the author!

Raisa was just a child when she was sold into slavery in the kingdom of Qilara. Despite her young age, her father had been adamant that she learn to read and write. But where she now lives, literacy is a capital offense for all but the nobility. The written language is closely protected, and only the King, Prince, Tutor, and Tutor-in-training are allowed to learn its very highest form. So when she is plucked from her menial labor and selected to replace the last Tutor-in-training who was executed, Raisa knows that betraying any hint of her past could mean death.

Keeping her secret guarded is hard enough, but the romance that’s been blossoming between her and Prince Mati isn’t helping matters. Then Raisa is approached by the Resistance—an underground rebel army—to help liberate the city’s slaves. She wants to free her people, but that would mean aiding a war against Mati. As Raisa struggles with what to do, she discovers a secret that the Qilarites have been hiding for centuries—one that, if uncovered, could bring the kingdom to its knees.

“A tense, romantic fantasy epic about prejudice, political struggle, and the power of words, SWORD AND VERSE kept me guessing at every turn. Kathy MacMillan is a writer to watch.” — R.J. Anderson, Andre Norton Award-nominated author of ULTRAVIOLET

Won by Buy It Now - Annotated Copy of SWORD AND...