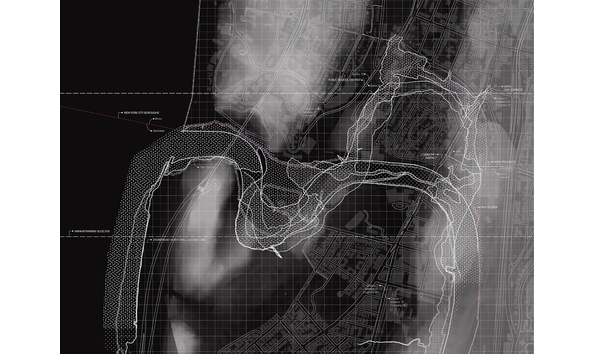 "Where the Borough Ends" by Future Firm

In 1939, when the Bronx Borough President, James Lyons, planted a flag on Manhattan’s Marble Hill and deemed it “Bronx Sudetenland,” referring to the Nazi annexation of regions of Czechoslovakia, he may have exaggerated the degree of conflict. Nonetheless, this moment marks one of many episodes in the conflicted history of Manhattan’s northern border, a line bounded by the east-west waterway that separates the borough from the mainland. However, this so-called “natural” border is far from static. Over centuries, Manhattan’s northern edge has been shaped and reshaped, cataloging New York’s evolving ambitions in its changing forms. The waterway has been reconfigured from swirling eddies in the 17th century, before settlement by Europeans; to the wadeable Spuyten Duyvil Creek; to the severing of the landmass by the Harlem Ship Canal in 1895; and finally, to the filling-in of the river north of Marble Hill in 1915.

Where the Borough Ends investigates this liminal zone at Manhattan’s northern edge, including its episodic reconfiguration. It renders visible the paradox of how we think about natural landmarks as fixed demarcations—a Chinese word for “border” still comprises the character for “river”—when they, in fact, are transformed at the same speed as urban change. Instead of showing a single iteration of Manhattan’s northern edge, this sand-and-water model represents infinite possibilities for the divide. Viewers get their hands dirty and shape the terrain between the two boroughs by molding the model’s scale landscape. An overlaid projection responds in live-time, extending Manhattan’s grid south and the Bronx’s urbanism north. Data points on the model’s sides serve as reference for historical datums of elevation, water level, and average housing prices.

Where the Borough Ends aims to provoke broader questions about how politically-configured landscape forms often result in “shared” liminal territories of both conflict and coordination. Currently, Marble Hill—the vestigial neighborhood on the North American mainland but legislatively remaining in Manhattan—represents a “shared” territory that is the urban legacy of the fluctuating border. Marble Hill residents vote for the offices of Manhattan Assemblyman, City Councilman, and Borough President, and are called for Manhattan jury duty, yet their school board representatives and city services, including the fire department, police department, and EMS, all hail from the Bronx.

Beyond New York, consider for example, the recurring border disputes resulting from the shifting of the Rio Grande at the Mexican-US border, resulting in both arbitration and re-channeling of the river. Or the shifting of the Sham Chun River between Hong Kong and Shenzhen, which once—when its course was corrected to respond to flooding—also allocated more territory to the S.A.R. collectively. These are symptoms of a long shift from the perception of landforms and waterways as immutable wilderness, toward the contemporary understanding of urban and landscape edges to be perpetually changing, bureaucratically-defined, and up for reconsideration. Today, a group called “The Great and Glorious Grand Army of The Bronx” performatively re-enact Lyons’ flag planting annually, defending against what they consider Manhattan’s “spoiled ramblings of the effete bourgeois.”

Future Firm is a Chicago-based architecture office founded by Craig Reschke and Ann Lui. Future Firm works at the intersections between landscape territories and architectural spectacle. Recent research explores the relationship between finance, economy, and the built environment.

Craig Reschke is an architect interested in landscape practices. He is a registered architect in the state of Illinois. He graduated from Harvard's Graduate School of Design, where his research focused on rural American landscapes. At Harvard, he received the Jacob Weidenmann Prize. He also holds B.Arch from University of Tennessee. Previously, Craig was a project architect at SOM and RODE Architects, where he led the design of buildings at many scales.

Ann Lui is an Assistant Professor at the School of the Art Institute of Chicago. She holds an SMArchS from MIT in History, Theory & Criticism and a B.Arch from Cornell University, where she was awarded the Charles Goodwin Sands Medal and the Clifton Beckwith Brown Memorial Medal. Previously, she practiced at SOM, Ann Beha Architects, and Morphosis. Ann was Assistant Editor of OfficeUS Atlas (2015) and co-editor of Thresholds "Scandalous" (2015).