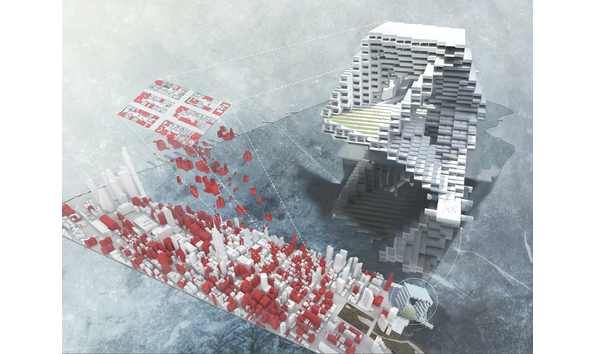 According to a Quantierra study recently featured in The New York Times, forty percent of the buildings in Manhattan could not be built as per the current zoning today, because they’re too tall, bulky, or dense. Between 32nd and 42nd Streets, the grid is at its most congested state, and the bustling blocks are crammed with old overbuilt building stock.

Where the west section around 34th Street is dense with amazing activities (Chelsea, the new Hudson Yards with the High Line, Penn Station, etc.), the East Side, on the other hand, is almost forgotten.

To mark the 100th anniversary of New York City’s zoning code, we propose the next dimension of zoning: a four-dimensional framework that un-crams Manhattan’s 2- and 3- dimensional congestion. By projecting the grid’s coordinates into Hypercubes, we developed a typology that falls between the scale of a city block and building; a city within a city. Located at the edge of the East River, the Hypercubes become a new terminal building, a domestic haven on top of the new Second Avenue Subway line, multiple ferry lines, and the LaGuardia water taxi.

This four-dimensional framework will re-activate Manhattan’s forgotten East Side. Flanked by a large suspended public park and pool, sixty percent of the Hypercube is public and shared program, while forty percent is occupied with mixed-use space and housing. This distribution allows the FAR of 10 to be at once condensed and airy; a new way of sharing and city dwelling.

Archi-Tectonics is a research-based design practice with an expertise in LEED design that works on multiple scales, spanning from cities to buildings to object design. We aim to achieve design efficiencies that express themselves in optimized modulations, resulting in original shapes and innovative structures. Built residential work includes the Greenwich Building in Soho, the Chelsea Townhouse, the Brewster Building, and the residential V33 Building (Manhattan),  The DUB-residence (Netherlands), and the 15-story American Loft Tower (Philadelphia). We recently completed several commercial projects, including the interior for the Netherlands Architecture Institute [NAI] in Rotterdam, Tashan restaurant in Philadelphia, and several flagship stores for Ports1961 in Paris, London, and Shanghai.  Archi-Tectonics has been chosen as Lead Architect on many projects internationally, including a bottom-up master plan for Downtown Bogota; the large-scale Yulin Master Plan in China; and the Waterfront Master Plan in New Rochelle, NY.

Publications include three monographs: Winka Dubbeldam, Architect [010 Publishers, Rotterdam, 1996], AT-INdex [Princeton Press, NYC, 2006], and the Archi-Tectonics Monograph [DAAB publishers, 2010]. Exhibitions include "The Unprivate House" (1999) at MOMA, and MOMA PS1’s ”Young Architects” exhibit (2001), a show at Max Protetch Gallery in New York City, an exhibit on proposals for the World Trade Center (2001), and two Venice Biennale exhibits (2002 and 2004), among others.