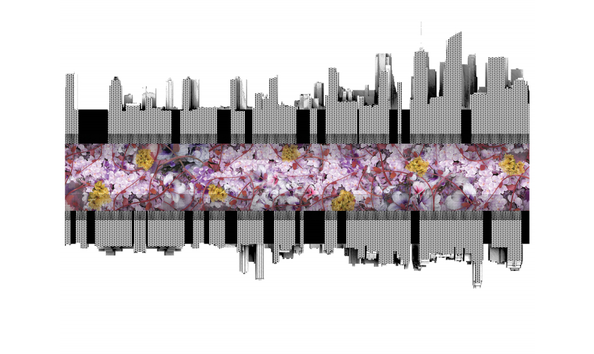 "The Sixth Burrow" by Atelier Manferdini

New York City is the most populous city in the United States, with a population ranked among the top 10 highest in the world. It is composed of multiple layers of grids to accommodate cars, subways, and slender skyscrapers. Unfortunately, the city’s current organization does not allow for the addition of any new green spaces for its inhabitants.

This proposal for Manhattan produces a new view of nature in a city that has grown accustomed to concrete, brick, and mortar. The site, situated along the 42nd Street corridor in Midtown, is a network that connects New York’s neighborhoods and boroughs. It is a 2-mile wide strip of Manhattan that contains major infrastructures such as the Lincoln Tunnel, Queens Tunnel, Grand Central Station, and the Port Authority Bus Terminal. While these networks connect Manhattan to other areas such as New Jersey and Queens, the presence of the United Nations also connects New York to the world. It  is home to the famous Theatre District, but also steps away from other cultural landmarks such as Times Square, the Chrysler Building, and Bryant Park.

Using Bryant Park as a point of departure, The Sixth Burrow proposes an alternative future for New York where public green spaces could exist. Using the public library as the anchor point, this project envisions extending the current park west to the edge of the island. In the process of the park’s extension, this new excavated park would require the removal of many existing buildings. However, in order to maintain the same volume of inhabitable space, the removed architecture would be built alongside the park directly underneath the existing buildings in Midtown. The new park will provide 0.25 square miles of public space and 2.75 miles of frontage overlooking it. While the properties around the periphery of the park gain a new view of nature, they not only increase in value, but begin to shift the paradigm of New York City urbanism.

Elena Manferdini, principal and owner of Atelier Manferdini, has over fifteen years of professional experience in architecture, art, design, and education. She is a licensed engineer in Italy, and a licensed architect in Switzerland. She received a Professional Engineering Degree from the University of Civil Engineering (Bologna, Italy) and a Master of Architecture and Urban Design from the University of California in Los Angeles (UCLA).

Elena Manferdini was recently awarded the 2013 COLA Fellowship given by City of Los Angeles Department of Cultural Affairs to support the production of original artwork. In 2013, she received a Graham Award for architecture, as well as the 2013 ACADIA Innovative Research Award of Excellence, and she was selected as recipient for the Educator of the Year presidential award given by the AIA Los Angeles. In 2011, she was one of the recipients of the prestigious annual grants from the United States Artists (USA) in the category of architecture and design.