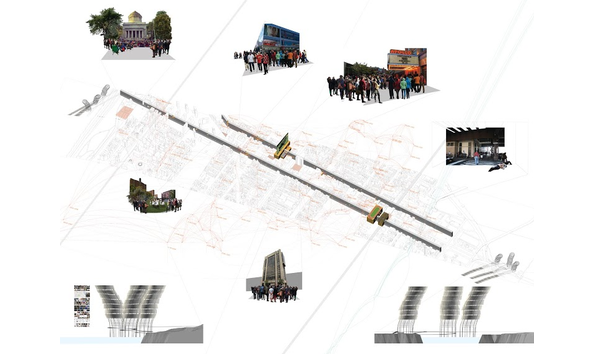 "Spook or Architecture and Imitation of Life" by Huff + Gooden Architects

125th Street in Harlem, USA runs along a rift in the Earth’s crust (known as the 125th Street Fault) from New Jersey to the East River. The fault line runs through layers of Manhattan schist skirting the northern edge of Central Park and extending southeast towards Roosevelt Island. However, 125th Street is historically also a line of cultural, economic, social, and racial demarcation.

The conflation of this line with globalization not only resulted in the gentrification of Harlem beginning in the 1990s, but it extends to the current conditions of cultural commodification, mis-appropriations, and mis-appearances. These are played out in urban space through the publicity of digital life evidenced in social media and the event-spaces of public protests, marches, festivals, rallies, memorials, disasters, vagrancy, and leisure. As this line becomes increasingly culturally ephemeral, it also becomes more globally ubiquitous, marked by conditions of intensification, extraterritoriality, and contestation.

Significant to the conflation of 125th Street are a number of economic developments beginning when the first international retail chain (The Body Shop) opened on the street in 1993, along with Ben & Jerry’s Ice Cream in the preceding year. These were quickly followed by the introduction of the Upper Manhattan Empowerment Zone in 1994, which brought $300 million in development funds and $250 million in tax breaks for new businesses such as Starbucks, Magic Johnson AMC Theaters, and the Harlem USA retail complex.

“Spook” recalls Koolhaas’ “Exodus or the Voluntary Prisoners of Architecture” and proposes the re-appropriation of 125th Street as a “City with a City” including housing that extends from the East River to the Hudson River. Yet, the urban future of this rift is imagined as a continually mediated event-space where urban life and digital life collapse the experience and conceptualization of city space. Social media housing in the East and Hudson Rivers posts and broadcasts the minutiae of daily life and urban spectacles, while parallel east / west walls of housing infrastructure demarcate the zone of intensification. The performance of urban and domestic life along and within the walls allows for slippages of identities, resistance to the commodification of difference, and the confoundment of social and economic disparities.

--
Huff + Gooden Architects is a collaborative architecture practice dedicated to the design and exploration of architecture and its relationships to culture and knowledge.

The firm was formed in 1997 by Ray Huff and Mario Gooden. In 2001, Huff and Gooden were recognized by The Architectural League of New York with the distinguished honor of “Emerging Voices.” Huff + Gooden Architects was simultaneously recognized by Architectural Record magazine as one of six leading firms practicing exceptional architecture outside the “Centers of Fashion.” Recently, the firm was selected to design the $67 million renovation and expansion to the California African American Museum. Huff + Gooden Architects is currently designing a 50,000 square meter urban redevelopment project in downtown Johannesburg, South Africa.

Additionally, Mario Gooden is Associate Professor of Practice at Columbia University GSAPP and co-director of its Global Africa Lab. Gooden’s research and writings frequently examine architecture and the translation of cultural landscapes defined by the parameters of technology, race, class, gender, and sexuality. Gooden is author of Dark Space (Columbia University Press, 2016) a collection of five essay that move between history, theory, and criticism to explore a discourse of critical spatial practice engaged in the constant reshaping of the African Diaspora.