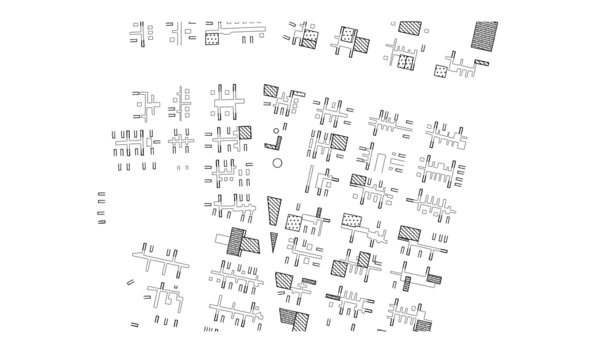 "SHARING METABOLISM. A Speculative Policy for Manhattan." by MAIO

At the verge of the twentieth century, cities like New York were full of apartment buildings that had collective kitchens, dining rooms, shared rooms, nurseries, shared domestic helpers, and more. At this time, both housing and collective life were understood as tools for social transformation. A culture of sharing ran the city, and had a direct effect on not only its housing typologies, but also the everyday life of its citizens. While many of the nuances and complexities of these particular buildings were lost over the course of the twentieth century, they live on into the present as a valuable point of reference for innovative domestic proposals.

The revival of “sharing culture” is affecting, as it had at the beginning of the twentieth century, the organization of housing and beyond. Our urban fabric presently is quite consolidated, and therefore this “sharing culture” must find its place in the pre-existent structure by mixing with and changing it progressively.

The present policy, called Sharing Metabolism, aims to encourage the collective use of residual, disused, or underused spaces in our close community. Is a reenactment of the initial laws that shaped the city and allowed things to happen. If the 1916 Zoning Resolution could shape the growth of our constructed environment and the profile of New York City, the proposed policy of Sharing Metabolism will shape how we share spaces in our close community.

This set of rules, and the spaces run by it, are metabolic because they adapt and absorb external change.

Unused private spaces owned collectively by residents’ associations, such as rooftops, patios, alleys, and empty services rooms, are potential spaces to be occupied under the Sharing Metabolism policy. The policy applies to pre-existing private spaces, and does not apply to public space.

Each space can be used for more than one purpose.

Uses may be diverse, but they have to be temporary to allow changeability and adaptability over time.

Each residents’ association has to take care of their Sharing Metabolist spaces, and must define how they will be used, for how much time, and who will manage them.

The intent of Sharing Metabolism is that it has an impact on the whole community, beyond the residents’ association.

*The model and drawing accompanying this policy shows which underused spaces could be occupied by Sharing Metabolism in the area of Washington Heights over the next fifty years (2016-2066).

MAIO is an architectural office based in Barcelona that works on flexible systems. The practice has developed a wide range of projects, from furniture and exhibition design to housing blocks and urban planning. MAIO recently completed the construction of a urban public square and an exhibition at the MACBA (Barcelona Museum of Contemporary Art), and is currently building a housing block in Barcelona, among other projects.

MAIO’s members combine professional activities with academic, research, and editorial ones. They serve as head of the magazine Quaderns d’Arquitectura i Urbanisme and teach at the School of Architecture of Barcelona ETSAB/ETSAV.