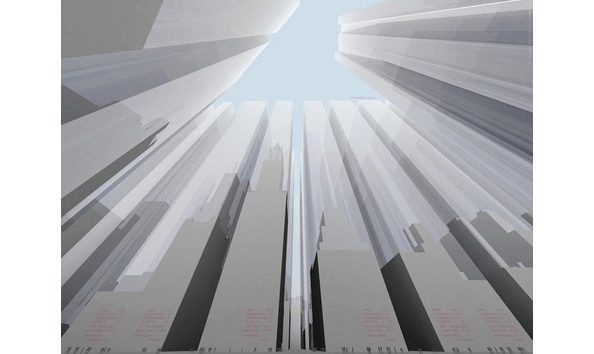 CORPSE
The city is already an exquisite corpse, a collective endeavor producing individual parts at the scale of the parcel that may or may not add up to a coherent urban "body." These 30 representations of the city shift the format of the game from the parcel to the precinct, from the writer to the reader. Sharing Manhattan-isms, a metropolitan exquisite corpse, hopes to reveal something unfamiliar, marvelous, and perhaps surprisingly prescient. This endeavor of multiple authors working on a shared "body" of the city occurs at a moment where collectivity, sharing, and the superabundance of information data are redefining our relationships to the city and to each other.

CODE
It has been 100 years since zoning first shaped New York City in powerful yet subtle ways; when the 1916 Zoning Resolution introduced volumetric controls to regulate building in bulk and to preserve "light and air" for the common spaces of the street. New York's zoning instruments have evolved to create new mechanisms that "shape" the city through incentives and trade-offs. The combination of constraints and incentives (privately owned public spaces and air rights) have produced a unique urban morphology that manages to strike a balance between degrees of prescription and degrees of freedom.

SKYLINE
We acknowledge the difference between height and density. Manhattan possesses both. Each offer a combination of costs and rewards. While height is measured in one dimension, offering bragging rights, visibility, and views, density is measured as a relational quantity. The notion of density--units relative to area--addresses urban qualities of efficiency and economy, as well as intensity and proximity, without automatically translating into height. The height of a building and its profile contribute to the urban skyline in particular ways that density does not.

POTENTIAL
Our interpretation of the city in the Lower Manhattan area, encompassing the World Trade Center site and the Lower East Side, maps the potential "air rights" above existing buildings and extends their footprints to a new datum line defined by the Freedom Tower. The difference between the actual height, the potential height achievable through unrealized floor area ratio (FAR), and a new datum, are modeled as columns of pure potential.

AIR
In New York real estate, the parcel has historically been the primary commodity. At a certain point of urban density, light and air become assets and commodities. The 1916 Zoning Resolution acknowledged the collective value of light and air, and the 1961 revisions to the Zoning Resolution introduced Transferable Development Rights, or Air Rights, making explicit the value of the "unbuilt." Mapping the air above Lower Manhattan and materializing it in the physical model serves to highlight the columns of air as commodities but also as resources. The uniform datum neutralizes the skyline function of pure height and returns the primary urban metrics to density.

Buoyancy is the quality of relative lightness, or the upward pressure exerted by a fluid in which a body is immersed. Reserve buoyancy, in nautical design, refers to chamber of air intended to remain above an anticipated flood line, with enough buoyancy to ensure a vessel remains afloat in the event of flooding.

Reserve Buoyancy recognizes the reserve potential of Air Rights in Lower Manhattan as a resource, but also as an emergency flotation device for the metropolitan ship as it confronts the precarious seas of contemporary Manhattan real estate and the extreme climatic events of our present moment.

Höweler + Yoon is an internationally recognized architecture and design studio, founded by principals Eric Höweler and Meejin Yoon. Originally known as MY Studio, our multidisciplinary practice operates in the space between architecture, art, and landscape. We believe in an embodied experience of architecture, seeing media as material and their effects as palpable elements of architectural speculation. While our work lies at the intersection of the conceptual and the corporeal, we are committed to both the practice-of and prospects-for architecture. Engaged in projects of all scales, we are interested in the material realities and material effects of our work. From concept to construct, we are determined to realize built ideas and to test projects through the dynamic interaction between the construct and the larger public.