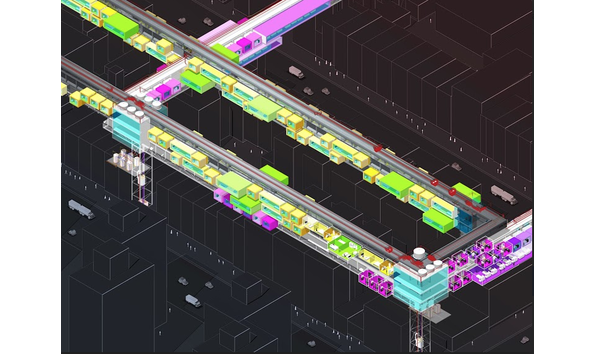 It’s 2026 and Constant is a creative consultant. He decides to spend the next three months in Manhattan, opens his app – New Babylon 2.0, checks which neighborhood his friends are staying in, and reserves a pod in Harlem. New Babylon 2.0 is a new online app, a conglomeration of various apps of the past (WeWork, Maple, Rent the Runway, Uber, etc.) - the Facebook of 2026.  With a monthly subscription, one can reserve a studio to live in, have access to office space, use a shared common closet, order food from a common kitchen. Structures are built as rings above existing blocks. Each ring has a designated function; live, work, and learn; depending on the zoning the block is in. Towers are built in the empty lots that connect with and support the infrastructure above. The infrastructure runs at the perimeter of each block, structurally supported by existing buildings underneath, sometimes connecting several blocks at a time. Entry towers provide common services (common closet, kitchen, laundry, and waste management system) and the system provides units that plug into the infrastructure above as needed. New Babylon 2.0 pays a monthly rent to co-ops underneath for the use of the air rights.

Constant enters his new/ temporary living ring. He picks up the clothes he selected at the closet, and settles into his home. Soon he will meet his friends in the common living room. He knows that there are a few ‘work rings’ close by that he can work from for the next few days.

From the balcony, he looks at the strange new skyline, a new parasite living on top of an old organism. Very similar to the old New Babylon, he has the freedom to move around but he is not the same person anymore. He doesn’t like the idea of drifting around aimlessly. After all he is addicted to his gadgets, constantly connected to everything everywhere, with a schedule simultaneously updated as he moves through the city. New Babylon 2.0 gives him the fake sense of freedom that late capitalist cities provide. After all he is old now. His old anarchist self doesn’t belong to this new system.

Büro Koray Duman is an idea-driven international practice that brings together an analytical and playful approach to a broad range of projects. A thoughtful and creative catalyst, Büro aims to explore the unexpected. We believe Architecture should be functional and unexpected, engaged and poetic, experimental and affordable.
Led by Koray Duman, Büro works on projects of varying scales, from a studio renovation and new gallery building for artist Richard Prince, to nation-wide flagship stores for Design Within Reach, art galleries, non-profit spaces and a prototype for a new cultural center in New York City. Büro has been internationally-honored with design awards and exhibitions and the studio’s projects have been widely published in The New York Times, Los Angeles Times, Interior Design, New York Post, Architectural Record, New York Magazine and Dwell.

Koray Duman, AIA, LEED is originally from Turkey, where he earned a BArch from Middle Eastern Technical University. Duman furthered his studies at UCLA Graduate School of Architecture and Urban Design with a master’s degree in Architecture. In 2009, he established Sayigh Duman Architects. In 2013, the firm transitioned into its current form, Büro Koray Duman. He is an adjunct professor at Parsons School of Design and a licensed architect in New York and Turkey.

Please note that all works are shipped at the buyer's expense. There is a New York Metropolitan Area standard fee of $30 for delivery. Otherwise, picking up your work is encouraged.
Payment can be made via credit card or check. All checks can be made to:
Storefront for Art and Architecture
Attn: Jinny Khanduja
611 Broadway, Suite 634
New York, NY 10012
1
Total Shares