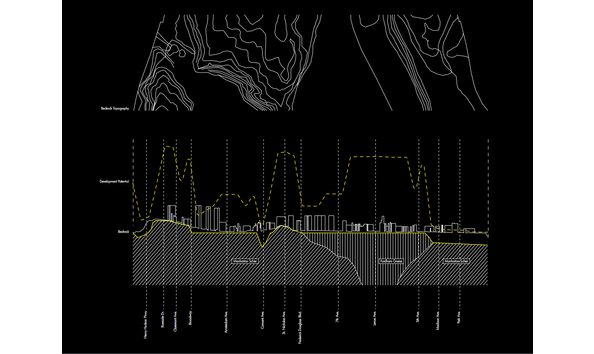 Projection and ink on paper.

As technology becomes more prevalent in globalized societies, the idea of shared space has become a dominant factor in how we consider the future of the built environment and the ways in which territory is best utilized. Boundaries, both physical and psychological, continue to blur and dissolve, so that ultimately we might expect that a greater percentage of “shared” space will define our lives. The “sharing movement” suggests a utopian vision of living harmoniously without the need for walls or possibly even permanent addresses. It seems to promise the potential for even higher spatial and social efficiency – resulting in an ever increasing density and proximity.

We have chosen to take a macro view of the fundamental infrastructure of the city, focusing not on the activity on the city’s surface, but rather how the natural underlying conditions – the city’s geology – may lend some insight as to how future density may develop. As intricate and interesting the networks above Manhattan’s street-level may be, the layered landscape that exists below the city’s surface, from the subway down to the natural bedrock, creates fascinating economies that have the potential to shape how and where we develop density efficiently. Here, we examine the unseen landscape to understand the potentials of Manhattan’s future cityscape.

TEN Arquitectos approaches each project through a rigorous process of analysis and three primary lines of investigation: architecture as public space; architecture as infrastructure and public platform; and architecture as contextual landscape; which establish existing and proposed connections of site, program and community. These layers of investigation inform the firm’s projects, both built and conceptual, and address the opportunities and power of architecture outside of its physical presence.

The resultant ideas lead to performative buildings that impact their context on multiple scales. Guided by the belief that architecture is a public amenity and responsibility, TEN Arquitectos aims to enhance the local communities of which their projects are a part.