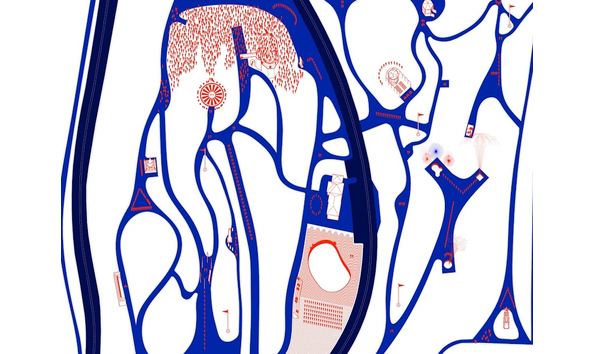 The idea that spiritual needs are an urban issue has always been part of human history. One of the biggest changes to occur in this century is the pluralization of cultural and religious references that have brought about both different religions as well as the collective practice of secular rituals.

The so-called “return of the sacred” is considered one of the consequences of the collapse of the absolute certainties of modernity, and implies a widespread system of architectures, people, and ritual objects.

Sacred spaces, attended physically, and even virtually, can be man-made or naturally spiritual. There are sacred spaces that include non-sacred spaces, or sacred spaces that, in certain occasions, may become non-sacred. A sacred space exists when it is interpreted as such. For the believer, space is not homogeneous. At the point one encounters a certain place, there is a break in the continuity of time and space. Due to the lack of space for different cultural expressions, public spaces are the locus where collective memories, public happiness, and discontent are ostensibly manifested.

Fort Tryon Park center for rituals is a diorama for human beings in which a series of full scale replicas of desired landscapes is reproduced. It is a collection of places by which fragments of existing monuments from every part of the world are reunited in the same park. Consisting of small pavilions, temples, open air monuments, and mausoleums, each replica is inspired by existing scenarios in which man and nature interact in different ways. Fort Tryon Park is a place of wonder where, along its small alleys, man can perform his own individual and collective rituals. It is a fragmented monument to individual desires, and religious and secular memories. Fort Tryon Park envisions a future in which remote places are physically reunited in the same territory.

Matilde Cassani moves on the border between architecture, installation, and event design. Her research-based practice reflects the spatial implications of cultural pluralism in the contemporary Western context. Her works have been showcased in many cultural institutions and galleries, and has been published in several magazines such as Architectural Review, Domus, Abitare, Arqa, Arkitecktur, and MONU Magazine on Urbanism.

She has been a resident fellow at “Akademie Schloss Solitude” in Stuttgart and at the “Headlands Center for the Arts” in San Francisco. In 2011, Storefront for Art and Architecture hosted an exhibition of her work called “Sacred Spaces in Profane Buildings. She also designed the National Pavilion of the Kingdom of Bahrain at the XIII Venice Architecture Biennale in 2012, and she took part of the XIV Venice Architecture Biennale (Monditalia) with the piece “Countryside Worship,” recently acquired by the Victoria and Albert Museum in London.

She has taken part in many international conferences and lectured at various international universities such as Columbia University in New York and E​cole Speciale d’Architecture in Paris. She currently teaches at Politecnico di Milano and at Domus Academy.