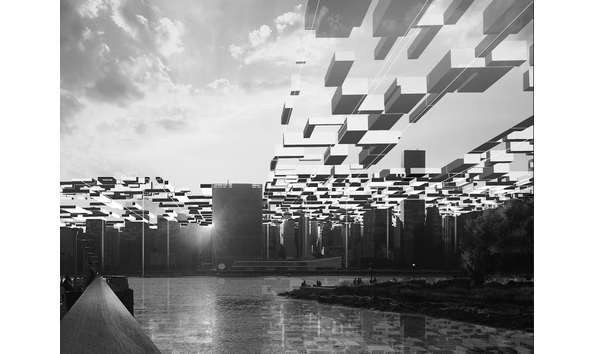 Visionaries have often dreamed of airborne and elevated structures, of cities floating above the earth, and of metaphysical concepts as much as physical projections. From Wenzel Hablik’s Colony in the Air and Georgy Krutikov’s Flying City to Constant’s New Babylon, Buckminster Fuller’s Cloud Nine, and Paolo Soleri’s Babel IID and Hexahedron, the idea of ‘floating’ and ‘lofting’ infrastructure and city space has persevered as an asymptotic trajectory for architects and city planners seeking new forms of urban inhabitation.

Throughout the 20th century, the growth of dense urban centers such as Manhattan have emerged out of opportunities provided by dense populations set against the maximization of property value. Consequently, urban forms have been shaped by the extrusion of lot lines, setbacks, and rights of way inscribed onto a ground plane, as well as by the push and pull between private and collective rights to infringe upon, or protect the air space that is above, and in between built and projected structures. However, with the density of cities growing in an upward trajectory, and congestion increasing at the ground level that creates inefficiencies, reduces productivity, diminishes opportunity, and decreases quality of life, we are perhaps compelled to re-think this twentieth century notion of ‘air rights’ and instead attempt a new understanding of the potential for occupying urban ‘air space’.

Our cities are in many ways already airborne, if one is to consider the digital information networks of Wi-Fi signals, satellite communications, and phone networks that bind us together and tether our structures within an invisible web. Sky_Lattice is a new conceptual approach to infrastructure, mobility, accessibility, and the public realm, and can perhaps be found through an inversion of sorts that is rendered feasible with the advent of drones and intelligent vehicles. It is an urban strategy that in the physical sense is top-down as opposed to bottom-up, while also economically and socially horizontal.

Might we envision a new type of ‘citygrid’ as an elevated and seemingly floating architecture set far above Manhattan’s existing ground plane? As a new occupiable datum offering vast areas of real estate for energy production, all the while remaining immune to the impending environmental calamities that might threaten Manhattan down below? Or as an elevated three-dimensional matrix, a network of new public nodes and distribution links that connect and bridge between, within, and through the upper reaches of the structures that we inhabit? Might we conceive of a shared ground comprised of lightweight and high strength long-span structures, where coordinated systems of intelligent drones, autodrive vehicles, and a new generation of robotic machines can access, service and make possible new communities, green space, and work and living spaces, along with places of entertainment, enlightenment, and repose?

Founded in 1989 by Hani Rashid and Lise Anne Couture, Asymptote Architecture is a leading international architecture practice based in New York that has distinguished itself globally with intelligent, innovative, and visionary projects that range from building designs to master planning projects; from art installations to virtual reality environments; as well as interior and industrial design.

Asymptote's approach to utilizing digital tools and technologies, contemporary theory, innovative building practices, and advancements in engineering solutions and environmental sustainability have afforded the practice a broad and powerful perspective on all aspects related to architectural building design and city planning.