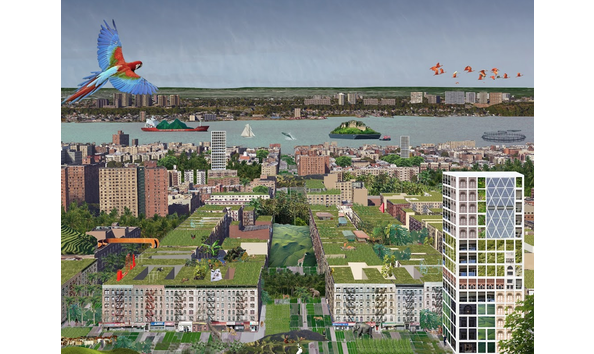 Who is the “we” that we consider when we think of sharing? Can we think of sharing much more radically and substantially than the way it is used by the (neo-liberal) instruments of flat-share, car-share, work-share, time-share, and similar devices that are mostly consumption-oriented? Can we radically expand the “we” to include animals, plants, and even inanimate objects? Can we think of a truly shared city where we humans are just one among many other actors in the urban fabric?

In reference to Bruno Latour’s concept of the “Parliament of Things,” I declare the future of Manhattan a City of Things. The right to speak and the right to be represented does not belong exclusively to humans. In a shared and truly urban environment, this right is extended to the non-human. It is extended to all things. We can no longer maintain the distorted dichotomy between culture and nature. We share this world with many. We are just one party, among all animals, plants, and objects. What if we welcome all things into our city?

This model represents a vision of Manhattan where all things, animate and inanimate,  are given a right to representation. Streets, roads, parks, and empty lots become a space for the public, for all things. Human transport is solely public, including an extensive underground system and bicycles. Cars are no longer used, freeing up an additional fifty percent of space for novel use, space to share. The model provides a habitat for a new fauna and flora to develop, a political ecology.

Given the nature of the small scale, this model partially operates on the level of illustration. It is a representation of our acknowledgement that the object-subject dichotomy does not apply in a shared city.

Manuel Herz is an architect based in Basel, Switzerland. His recent projects include the prize-winning Synagogue and Jewish Community Center in Mainz, Germany and housing projects in Germany, Switzerland, and France. He has taught at the ETH Zürich and at Harvard University’s Graduate School of Design. He is currently a professor of urban and territorial studies at the University of Basel. Manuel's research focuses on the relationship between migration, architecture, and nation-building, and the spaces of refugee camps. He has exhibited widely, including at the 2016 Venice Architecture Biennale, where he designed and curated the National Pavilion of the Western Sahara. This was the first time a nation-in-exile was represented at the Venice Biennale. His books include "Nairobi: Migration Shaping the City," "From Camp to City: Refugee Camps of the Western Sahara", and "African Modernism – Architecture of Independence."